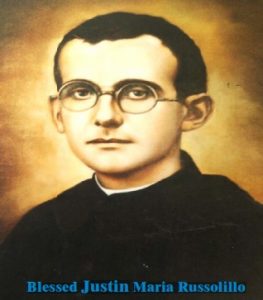 Blessed Justin Russolillo was born on 18th January 1891 and baptized Italy). After completing grammar school in his hometown, he entered the seminary of Pozzuoli; on 20th 1913 Justin was ordained a priest. He started two congregations: Vocationist Fathers and Sisters. Fr. Justin completed his earthly August 1955. Pope John Paul IInd officially declared that Fr. Justin had practiced the Christian virtues in a heroic manner and therefore he was being raised to the dignity of venerable.Justin was raised to the honour of Blessed by Pope Benedict XVI in year Pope Francis signed a decree for the declaration Blessed Justin Maria Russolillo.